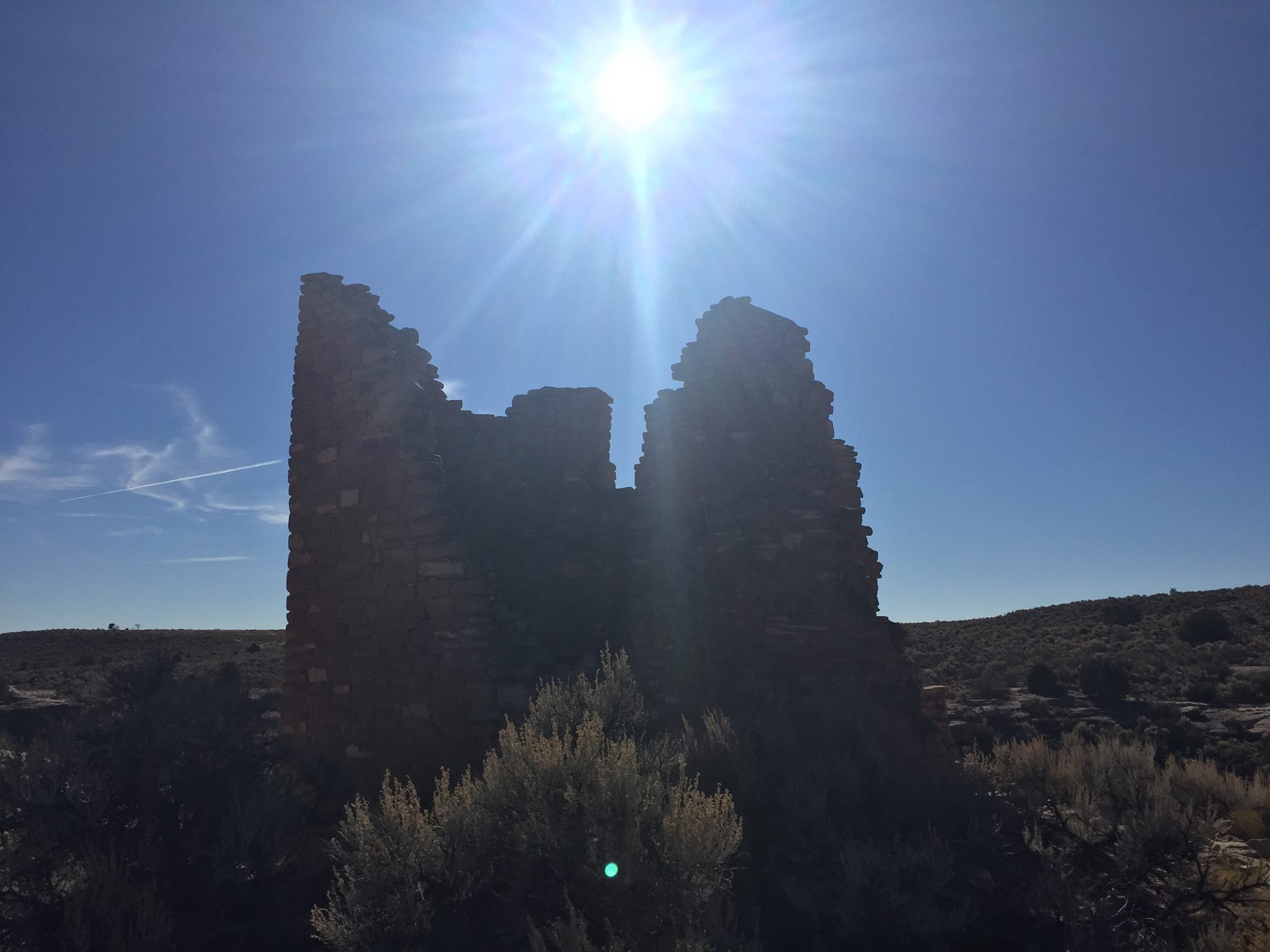 To the Rivers of the East, Rise to the sea.

To the Rivers of the South, Rise to the sea.

To the Rivers of the West, Rise to the sea.

To the Rivers of the North, Rise to the sea.

The Greatness building inside,

Two years ago, I was on my way home to Sedona from Colorado, and I saw a sign that said, “Hoovenweep National Monument.”

I had stopped at a tourist center in a small Mormon town on one of my previous trips, and the woman at the counter said, “you must visit Hoovenweep.” She happily told me of going there with her family, and how much she loved it, and she sang a message into my Spirit.

So, when I saw the sign, it was like a bright spot light was shining on it, and I knew I had to go.

It was late fall heading into Winter, the land was so crisp and pure. The drive to these sacred lands was clear and bright. I knew it would be a special visit by the energies presented.

When I arrived at Hoovenweep, there was only one other car there, and the parking lot was clear. I walked to the visitors center and received a map. The woman at the counter confirmed it was a good day to visit, and they would likely have few visitors.

It was after the holiday season, and the land was rejuvenating from the hoards of people who had been there during peak season.

Over the years, living in a tourist town, I know the rare gift locals are given in Winter and Summer. The gift when you can experience the sacred land without interruption. When you can cross the mountains in silence, and reverence. When you can hear the ancestors in the whisper of the wind. The times when the land is pure, pristine, and uninterrupted by the noise of endless talking, screaming, and questions.

We live in a noisy society. When you come from ancestry that honored the silence, noisiness takes a lot of getting used too.

It’s always been easy for me to silence my mind, this put a lot of noise into my head growing up. However, in my bones, I come from people who only spoke when it was significant. Many things can be said, without being said. When you honor the silence, communication is much smoother, and there is an innate flow beyond the words you begin to step into when you silence the mind.

On the day I went to Hoovenweep I was blessed with that sacred time when I could go deep into my prayers, and songs to the land. Those rare days are a gift when given, and cherished as precious.

As I walked the ancient grounds, admiring the mountains and ruins. The ancestral dwellings shined despite the wars of , I couldn’t help but pull the sacred into my breath. To know that my feet were touching the feet of my ancient ancestors.

I found myself drawn to one particular dwelling, and I sat to sing my songs and gift my offerings. This was the dwelling known as “The Twin Towers.” As I gazed at this ancient tower, I saw “his,” and “hers.” A love affair that stood strong together no matter the storm.

I saw stories of ancient times, where men and women worked together in perfect harmony. Where men protected, and women nurtured. I saw communities gathering to honor the sacred, and wholeness where all were welcomed into the circle of life.

These “Twin Towers,” reflected me a beauty of ancient love, and I was captivated by the light.

Two ravens flew above me, as I faced an unknown, but known mountain. This sacred Mountain I would later know to be the “Ute mountain,” spoke to me. I didn’t know this mountain, but as I gazed at his profile while singing my songs, I felt the mountain rise from a sleepy slumber.

This is what I felt and experienced as I saw this sacred mountain for the first time. I knew that this mountain called me to sing. He called me to pray, to offer, and to heal.

It replenishes the Earth.

We are fulfilling our honor of giving back, balancing give and receive, and honoring the Great Spirit within all life.

In this sacred moment with the mountain, I saw a reflection of greatness that was ready to birth. A rising of Indigenous ways bringing humanity back to the center. Back into balance. Back into harmony. Bridging love, with life in an ancient, yet modern dance.

I realized in that sacred breath, that this journey is an ancient journey. Many have faced the same challenges we face now. Many died, and gave their lives for the struggle we walk within. Many have prayed for the time when the sacred mountain would rise once again.

On the winter day when Hooveweep called me, I was blessed to see that ancient beauty rise. I saw the significance of prayer. I witnessed the miracle of song and prayer.

The sacred Ute mountain, called me and I felt gratitude the entire journey.

I continued on my journey after my ceremony and walked the entire monument. I spen hours exploring, and when I was finished, new visitors arrived. The entire time I was there I saw no people. I received a whole day of beauty uninterrupted.

Before leaving Hoovenweep I saw a plaque facing the sacred mountain. It spoke of a legend of Chief Ouray, leader of the Ute Mountain Tribe who connected with the Ute Chief who lives in the mountain. You can see the chief’s outline very easily. I saw it immediately when I first sang to the mountain. The plaque confirmed the vision I had seen of the Red Nation Rising, that there would come a time when the mountain would awaken. When the ancient chief would return.

The Sleeping Ute Mountain went to sleep after many battles with evil. He began to retreat, to heal, to “sleep,” waiting for the day when Earth’s children would “rise” again healed and whole.

He’s waiting for the day, when ancient songs, sung by ancient ancestors would return to revive him and restore his power.

I sat in reverence at the confirmation, as it always comes at the end. After every journey, there is a confirmation that truth has been revealed. The signs are everywhere, but they often do not scream. We can miss them if we don’t follow them.

On that sacred day, I’m glad I followed the signs.

I love when the Great Mysteries plans turn out better than anything the mind could “figure out.” When one step leads to the next, one “coincidence” leads to synchronicity, and love flows uninterrupted.

One of the great lessons I have been blessed to learn on this journey through the sacred directions, is everything is a reflection of love or fear.

Nothing is an accident, and the only “thing” to do is to “listen and follow.”

Control is an illusion, that comes from trauma.

Life is a , it flows to it’s greatest destination. It follows ancient pathways that it has known since ancient times.

Our soul is that river, and when we flow, our lives become a walking mystery.

My prayer is to walk that mystery uninterrupted until my last breath.

I pray to see the day when the ancient Chief within the Ute mountains will rise once again, and all Earth will return to peace and harmony.